Omnipork has landed! This game-changing versatile plant-based pork is so good, you wont believe it’s not the real thing.

It has a tender, juicy texture and rich meaty flavour – just like pork mince. It’s well seasoned but takes on additional flavour brilliantly. You can cook it straight from frozen and it cooks just like pork mince, and crisps up nicely when fried. It’s insanely versatile, can be pan-fried, oven cooked, steamed, deep-fried, stuffed, crumbled or turned into meatballs – any dish you’d use pork mince in basically.

Made from a unique combination of Shiitake mushrooms, pea protein, non-GMO Soy and rice. Its vegan, Non-GMO, High in protein, Low in fat and has zero cholesterol!

Delivered frozen, it’s so versatile, you’re going to want to stock up your freezer so you can use it whenever you like.

Make a meal out of it

Create a menu-ready recipe at home.

100% plant-based and every bit as versatile and delicious as the real thing.

Chef tips and ideas direct to your inbox

Unfortunately there are a few areas we cannot deliver our full range to. Please check if we can deliver to you.

We are now delivering all products to your area.

We are now delivering to your area. However, at the moment we are only able to offer you a selection of products from our range. To make life a little bit easier, you will now only see the products available to you.

We’re sorry but we don’t currently deliver to . 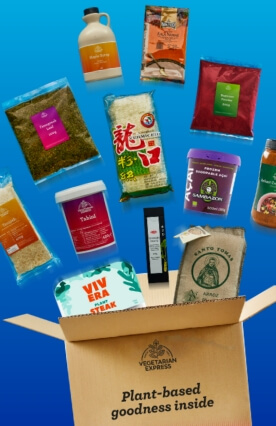 Get £10 off your first order (when you spend £60), when you sign up to our newsletter. You’ll receive chef tips, recipes and offers.

Perfect, you’re all signed up. Check your inbox shortly!